Home » About Us » Events

It is our pleasure to invite you to CCS Chintan. We are hosting Atanu Dey on 2 December 2014 to discuss freedom, rules and wealth creation.

Atanu is an economist with a background in development. He did his doctoral work at the University of California at Berkeley. Prior to going back to school for his PhD, he worked at Hewlett Packard in the Silicon Valley in their computer systems division. While he enjoyed working for HP, he realised that he was more interested in understanding why India was poor and he quit to travel India, US and Europe. His travels gave him the insight that economics informs the question of poverty better than any other discipline.

We look forward to your presence at the discussion on Tuesday. Please RSVP to Manasi Bose (manasi@ccs.in | +91 98107 72964). Due to space limitations, this is an invitation-only event.

Workshop on Street Vending Act: From Ideas to Action

Centre for Civil Society and National Association of Street Vendors of India, with support from Friedrich Naumann Foundation (FNF) is organising a workshop for officials of Municipal Corporations on implementing the provisions of the legislation in its most appropriate manner and spirit. The training program aims to facilitate corporation officials to understand the legislation thoroughly and develop an execution plan for their cities. For more information click here.

Why Liberty? - Your Life, Your choice, Your future

Venue: Hansraj College, New Delhi
Hansraj College in partnership with CCS is hosting Parth J Shah, President, CCS for a talk about why we need a society based on liberty, and why this society is the best way to achieve every individual's full potential. "Why Liberty? - Your Life, Your choice, Your future" is based on the book edited by Tom G Palmer and published by SFL.

Venue: Miranda House, New Delhi
Miranda House, in partnership with CCS, is hosting a panel discussion on 'Rethinking Capitalism'. Speakers on the panel will be Parth J Shah, President of Centre for Civil Society, and Nandini Dutta, Associate Professor, Economics at Miranda House. The talk will explore whether capitalism is heading towards an inevitable apocalypse, and whether a solution to the problems that plague the capitalist structure can be found within the system. Parth J Shah will explore the self-sustaining nature of capitalism, while Ms Dutta will offer a counter-view.

Centre for Civil Society takes great pleasure in hosting a public lecture on ‘Globalisation: Why it's an opportunity for developing countries?’ by Johan Norberg, one of the world’s most eloquent liberty advocates and most known as the author of In Defense of Global Capitalism on 16 October, 5:30-7:30pm at Lecture Hall, UChicago Center in Delhi, DLF Capitol Point, Baba Kharak Singh Marg, Connaught Place, New Delhi.

He has published numerous books including In Defense of Global Capitalism, which earned Atlas Networks celebrated Fisher Award in 2002,has been translated into a dozen languages, and inspired the British Channel 4 documentary "Globalisation is Good". Norberg will also host a national public television special, produced by the Free to Choose Network, about the effects of economic freedom in South Korea, Chile, Zambia, and Slovakia. Norberg is a senior fellow at the European Centre for International Political Economy and at the Cato Institute.

Attendance is through Registration only. For any queries or further details, contact Samta Arora (samta@ccs.in) 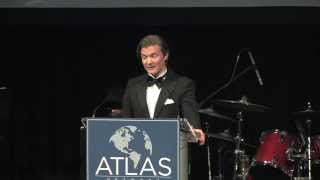