The 5th edition of the Asia Liberty Forum was held at the Leela, Mumbai on 10-11 February 2017 in partnership with the Atlas Network, Friedrich Naumann Foundation, John Templeton Foundation and the Smith Family Foundation. The conference brought together over 200 champions of liberty from around the world to brace the call of liberty in this part of the world. Aimed at advancing liberty and free markets in the region, the forum brought together the best of the liberal minds in Asia, including intellectuals, think tank leaders, authors, investors, development practitioners and young liberty champions to dialogue and deliberate, build friendships and networks, share ideas and best practices, and to learn and engage with the movement's most distinguished guardians.

The conference featured panels on issues pertinent to the Asian context such as "The Compatibility of Islam and Freedom," "State, Private Sector and Liberty in a Digital World," and "Regulations for a Prosperous and Innovative Market Economy." It also featured addresses by noted public intellectual Chandrabhan Prasad on "Economic Freedom for Human Rights," and the Bastiat award-winning journalist Amit Varma on "The Landscape of Freedom in India." There were also important exchanges on best practices of various aspects of think tank management such as "Running a Successful Think Tank" and "Fundraising: Getting Active and Getting Creative".

Mumbai also witnessed the first Asia Think Tank Shark Tank competition which featured three contestants from across Asia. They pitched their innovative projects before a panel of philanthropists and the regional network of free-market think tanks for the chance to win US $5,000. The contest was won by Tricia Yeoh of the Institute for Democracy and Economic Affairs, Malaysia, for her project on creating a market-friendly regulatory environment for small business owners. This edition also featured the second annual Asia Liberty Awards Ceremony, which was won by Centre for Civil Society for its work on increasing Economic Freedom and the Ease of Doing Business in India. For the first time, #AsiaLF17 was also broadcast to an online audience through a live-stream on Facebook and Twitter which drew thousands of viewers from across the world. This celebration of liberty was brought to a close by a series of "Social Media awards," recognizing the most entertaining and creative posts and images from delegates.

The Asia Liberty Forum 2017 hosts a list of prominent academicians, public influencers, and liberty champions who will be speaking in our programs and panel discussions. 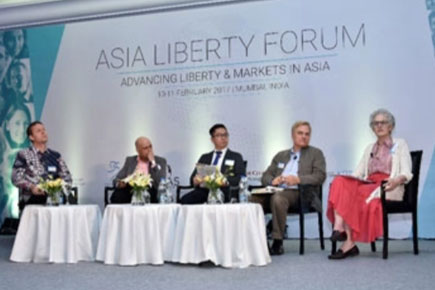 Winning the battle against populism
Tom Palmer: Inequality is not the issue, what bothers people is the "psychological threat to my perceived status" 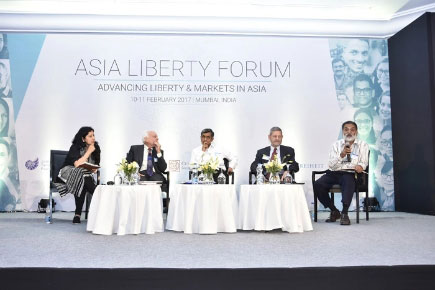 Property Rights and Poverty alleviation
Ambrish Mehta: Give the poor rights and they turn rocks into a garden 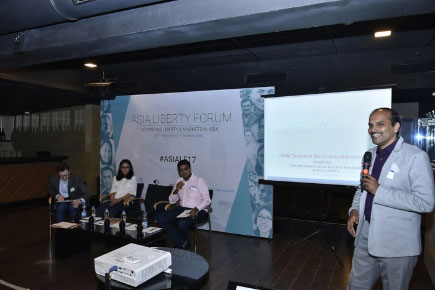 Creating the right narratives for liberalism
JP Narayanan:"The Public Sector is the Private Property of those in Public Office"
View All
Gallery 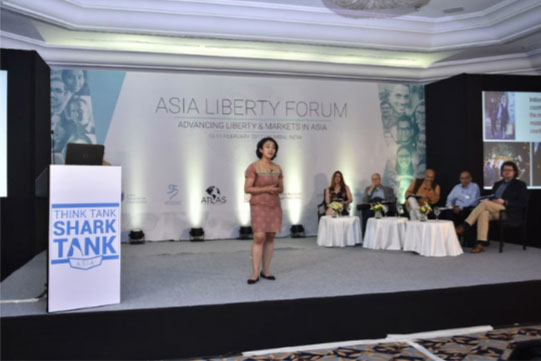 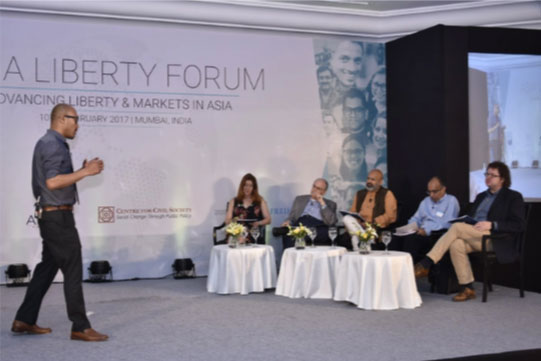 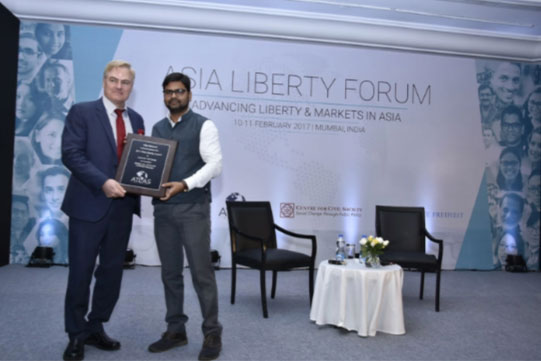 Amit Chandra, of Centre for Civil Society, is awarded the first place at Asia Liberty Awards 2017 by Tom Palmer of Atlas Network

Amit Chandra, of Centre for Civil Society, is awarded the first place at Asia Liberty Awards 2017 by Tom Palmer of Atlas Network
View All
Conference Schedule

View the complete range of panel discussions, training workshops and keynote addresses that are spread over the two days of ALF 2017 here.

2 & 3 February 2013, Delhi, India attended by 200 individuals from 30 countries. The opening address was delivered by Mr Baijayant “Jay” Panda, Member of Parliament, who spoke of the historical phobia of Indians towards foreign investments and free trade, following the experience of the East India Company and the ensuing colonisation of the country by the British, and emphasised that these fears must be allayed for India’s economy to continue growing. Zoltan Kesz of the Free Market Foundation(link is external), Hungary won the $5,000 Liberty Entrepreneur of the Year competition for research, awareness-raising and education in combating Anti-Semitic Conspiracy Theories as Tools for Extremist Political Mobilization.

7-9 January 2014, Delhi, India attended by 200 individuals from 40 countries. Gurcharan Das, acclaimed author, commentator and public intellectual set the tone of the conference by narrating the Indian growth story which according to him is a result o dharma-governed market forces. Keynote speaker, Razeen Sally from the Lee Kuan Yew school of public policy from Singapore credited the unprecedented growth in Asia in the last decade to the expansion of natural liberty and the subsequent emergence of the ‘animal entrepreneurial spirit’ in individuals. Chanyang Ju’s closing address was one of the most heart-wrenching and inspiring moments of the forum. She told of her heroic escape from North Korea, how she was captured and sent back, and her determination, which led her to try again–successfully this time, and her fight for the freedom of the countrymen she left behind. She highlighted the power of information and recounted how her family was inspired to escape by listening to illicit South Korean radio broadcasts.

8-10 January 2015, Kathmandu, Nepal, attended by over 250 individuals from 30 countries. After two successful years of organising the forum in India, in 2015 we partnered with Samriddhi, The Prosperity Foundation, to lay the tradition of providing regional partners the opportunity to bring to their country, Atlas Network’s global community of freedom champions, mentors, scholars, change agents, and future leaders, for a public celebration of our ideas, our heroes and our successes in Asia. Over three days, delegates exchanged ideas on more than 20 topics ranging from practical tools for successful think tanks to inspirational explorations of the ideas of liberty. The conference also explored the best ways to improve our present and future and also reflected deeper into our history to highlight what makes these ideas truly Asian.

18-20 February 2016, Kuala Lumpur, Malaysia, attended by over 250 individuals from 28 countries, and hosted in partnership with the Institute for Democracy and Economic Affairs (IDEAS). Highlights included Speed Networking, designed to help attendees expand their contacts; training workshops to hone skills in marketing, social media, and entrepreneurship; a documentary screening of India Awakes; and the Elevator Pitch Competition, in which participants present their 60-second pitch with the chance to win a prize.