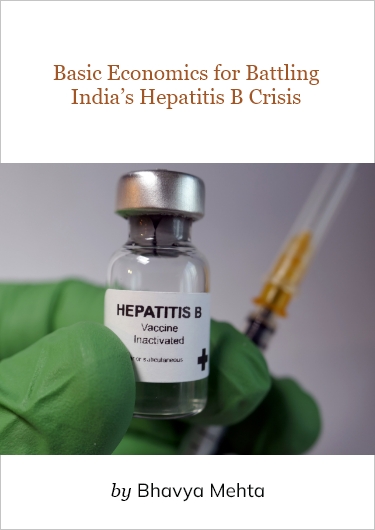 It is estimated that approximately 40 million people in India are infected with Hepatitis B and as  per National Centre For Disease Control, India has an “intermediate to high endemicity” of the  disease. Though the Hepatitis B vaccination is a part of the Universal Immunization  Programme, the coverage of the vaccine is only 86%, with coverage at the birth-dose level being  as low as 45% even though almost 79% of the deliveries were estimated to be institutional  deliveries in the year 2015. I realised the severity of this issue during a conversation with my own doctor.

India has officially committed to ending viral hepatitis by 2030 as a sustainable development  goal (SDG), and it is time that the government intervenes with adequate measures. The need for  such intervention can be justified through basic economics. Situations of market failures call for state  intervention and the issue of Hepatitis B certainly has quite a few market failures attached  to it. Market failures can be of four types: market power, information  asymmetry, externalities and public goods.

Two major causes of Hepatitis B are mother-child transmission in pregnancy and infection through blood transfusion. Information asymmetry exists as there is a severe lack of knowledge  of resource management in healthcare workers in the country, that leads to wastage of vaccine in the 10-dose vial. The healthcare workers are unaware of the fact that the World Health  Organisation (WHO) has stated an open-vial policy for a maximum of 28 days for the same. Due  to this market failure, the birth-dose coverage has remained at low levels in the country and has  also often led to misallocation and underutilisation of resources.

Though the right to health is not a fundamental right in the Constitution of India, multiple  judicial bodies have interpreted the Right to Life under Article 21 to include the right to health. The Supreme Court of India’s verdict in Bandhua Mukti Morcha v Union of India & Ors also  interpreted Article 21 in a similar manner, deeming the right to health a public good. A  public good is one that is non-rival and non-exclusionary in nature. While this can’t be deemed true in economic terms, given that health is in fact a private good. India’s pandemic experience reinforced this as hospital beds and Covid-19 treatment became incredibly excludable. However, recognising every individuals’ right to be healthy and safe from the disease of Hepatitis B is the need of the hour for India.

Further, wider coverage of the Hepatitis B vaccine, much like public goods, will have positive externalities. The vaccine would not only protect the individual but also limit the possibility of transmission through blood transfusion, sexual transmission via semen, or any other exchange of bodily fluids. These are factors that a person would not directly take into  account when deciding how much they are willing to pay for the vaccine. While healthcare can’t be deemed a public good, the mismatch between marginal social benefit (MSB) and marginal social cost (MSC) will lead to a market failure as vaccinations will take place at a level that is less than what is socially optimal.

Successful implementation of state intervention is possible if we closely look at the issues at  hand. The problem of wastage of vials showcases that there is a need for increasing awareness  and developing an effective network for data management for the vaccine vials. Though having  vaccine vial monitors (VVMs) for each vial would be the ideal and direct way of solving the  issue, the pandemic has led to a shortage of VVMs. This makes the open-vial policy of WHO, difficult to be implemented because of the lack of VVMs and proper monitoring of the  temperature-controlled storage at every center after opening of the vials. Since the birth dose is a  safety net that is critical for minimizing the chances of transmission, the only way of affording a  delay in the process of giving the dose, is through testing of the mother for Hepatitis B surface antigen (HBsAg) and the test coming out as negative for the same.

What happens in case the test comes out as positive? The critical window for babies born to  mothers infected with the virus is only 12 to 24 hours. Hence, this calls for the government to  establish a data management system that can timely connect hospitals, healthcare centres in rural  as well as urban areas to specific central district or provincial hospitals that have proper facilities  for the temperature-controlled vaccine storage and provide for enough inflow of patients from  around the region.

As per a Times of India report, the price of a Hepatitis B vaccine ranges from INR 45 to INR 500 for paediatric and adult dose.  Under the Ayushman Bharat, INR 5 lakh is to be provided to each family in a year  for health coverage. These funds, however, are allocated for secondary and tertiary care. A small part of these funds, if used for prevention of Hepatitis B, can reduce secondary and tertiary costs for the government.It is important that India formulates periodic impact assessments of the HBV vaccine and make  changes to its model accordingly. The National Action Plan – Viral Hepatitis, launched in 2019,  must include adequate training of the healthcare workers so that they efficiently use the vaccines  to the best extent possible, leading to minimum wastage of the vials. To encourage healthcare workers to seek training, behavioural economics’ nudge theory can be employed. This would lead to positive reinforcement and improved resource management decisions at healthcare establishments.

India can look at Thailand’s model for controlling the disease that has helped the nation to successfully reduce the HBsAg prevalence to <1%. Both India and Thailand have a policy of universal Hepatitis B vaccine birth dose and as per a report published by National Health Systems Resource Centre, Thailand’s method of health care service organization is very similar to India and they in fact started by studying the example of Kerala. Hence, India can use the same to  scale up and enhance efficiency of health care services in a phased manner.  These state interventions shall not only help India meet its Sustainable Development Goal for 2030, but also play a pivotal role in saving the lives of millions of Indians.