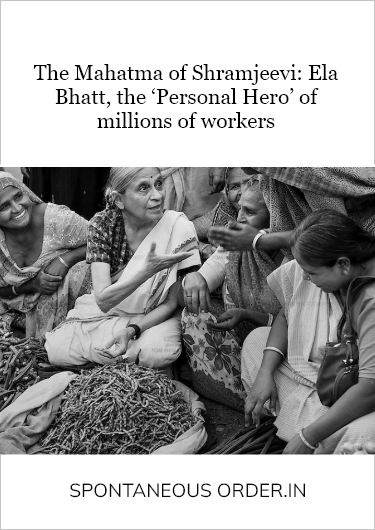 The Grande Dame of the informal sector, a gentle revolutionary and a Gandhian at heart, lives on as a personal hero of millions of workers, reformers, and street vendors across the country.

Ela Bhatt, lovingly referred to as ‘ben,’ or sister, by millions of women across the world, was a pioneer who redefined the concept of empowerment, especially for the ‘invisible’ labour force. Ela ben devoted herself to the cause of sustaining the voice, visibility, and validation of the approximately 2.1 million informal women workers through Self Employed Women’s Association (SEWA).

Ela ben was a philanthropist, women’s rights activist, lawyer, and gentle leader. She believed in empowering the social position of every woman in the workforce. Her message was not loud, yet it was powerful enough to be heard for generations, in the echoes of ‘self-reliance’ and ‘economic empowerment’ of women. Ela ben believed and strongly advocated that empowerment is a constant opportunity to practice self-confidence which leads to ‘Azadi’ or freedom. A worker attains true freedom only when they have the opportunity to grow and earn their livelihood.

An exemplar of Gandhian principles, Ela ben believed in the virtue of simplicity to identify problems and their solutions. Untouched by her achievements and recognitions,  Ela ben remained open to new ideas to understand the various economic challenges faced by women in the informal economy. Ela ben’s work inspired many world leaders, making her a ‘personal hero’ of women workers globally.

A staunch supporter of equal economic participation, Ela ben in her book ‘Anubandh: Building Hundred-mile Communities’, envisaged an economy of nurturance. It is an economy that champions local means of livelihood to align with its natural environment. This concept, as highlighted by Ela ben, is not a solution but a means to plan ahead to study the impact of our actions on others in a community that includes a producer, consumer, and their ecology, to build accountability locally. Ela ben believed in developing an ecosystem where the community, including the locally integrated change agents, witnessed the impact of their actions leading to informed decisions. She believed that change is initiated from the bottom of the pyramid when the unheard voices become the catalysts of revolution. One of many such voices is that of street vendors.

Approximately 2% of the population in the urban informal sector take up street vending since it is a low-cost enterprise. Street Vending caters to the demands of millions of consumers for a sustainable supply of affordable and essential goods. This is the concept of an ‘Economy of Nurturance’, free of gaps and exploitation,  empowering local means to promote sustainable livelihood for all.

Championing the rights of the lower strata of society, Ela ben advocated for the rights of street vendors. Her efforts materialised  in 2014 when the Parliament of India passed the Street Vendors (Protection of Livelihood and Regulation of Street Vending) Act, 2014 (SVA). This Act formalises vending and creates a uniform framework for protecting vendors’ rights. However, vendors continue to face harassment, extortion, and evictions at the hands of local authorities without any relief from the courts. One of the gaps in the proper implementation of the  SVA is a  lack of dedicated and robust mechanisms.

From the perspective of affirmative action, the law further fails to establish gender protection guidelines for women and transgenders. A study by Women in Informal Employment: Globalizing and Organizing (WIEGO) reveals that women constitute 30% of roughly 3,00,000 street vendors in Delhi. As consumers, we fail to realise these vendors’ plight and the hardships they face regularly. Apart from constant evictions and harassment, these vendors, while working in extreme conditions over long hours, lack basic hygiene requirements such as water and toilet facilities. In addition, the SVA fails to define guidelines for the safety and security of women street vendors at the workplace from local goons, burglars, and money lenders, among others.  The model of ‘Mahila Bazar’ initiated by SEWA under Ela ben’s leadership to address the aforementioned struggles is a milestone initiative in this regard. Established in Tagore Road in 2009, Mahila Bazaar accommodates over 200 women vendors from different parts of Delhi who vend with dignity, without facing any harassment. The bazaar has arrangements for drinking water and toilets for the vendors. Further, following constant pursuit, the MCD has also reconstructed the roads dug for the sewer connections, and the police department and traffic control authority are now being pursued for no objection certificates for vendors.

Street vendors in India contribute greatly towards the country’s savings and gross domestic product. Their role in the economy deserves due credit and Ela ben, being the holistic visionary she was, focused on empowering the most vulnerable yet significant players of the sector. She believed when millions join hands to achieve a single goal and recite ‘Ame karishu kamyab’ (Gujarati song similar to We Shall Overcome), there will be light to guide the path towards change. Ela ben awakened a spirit of hope in millions of workers and reformers through her actions and guided us to realise the true value of simplicity and the power it beholds to maneuver history.