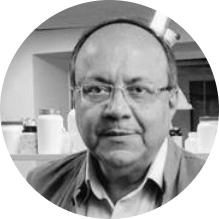 Professor Samir K. Brahmachari completed his Ph.D. in Molecular Biophysics from the Indian Institute of Science, Bangalore. He served as the Director General of the Council of Scientific and Industrial Research (CSIR), which is the largest publicly funded organisation involved in scientific and industrial research with 37 constitutional laboratories across India.

He is the pioneer of genome analysis using computational tools alongside making major contributions in the area of miRNA mediated regulation of host- pathogen interactions and cellular regulation. The Open Source Drug Discovery platform, with its unprecedented scale of participation by students and professionals, under the innovative directions provided by Professor Brahmachari, not only accelerates drug discovery, but also holds a promise of tremendous and disruptive impact on the economics of drug development for neglected tropical diseases like TB.

Professor Brahmachari has more than 12 patents, 23 copyrights and over 155 research publications to his credit. He is the recipient of a large number of National and International awards, including the prestigious Shanti Swarup Bhatnagar Award (1990) and is an elected member of all four academies of science and engineering in India.